Revelstoke RCMP and the BC Coroners Service are investigating after a body was located in a submerged vehicle in Griffin Lake last week. 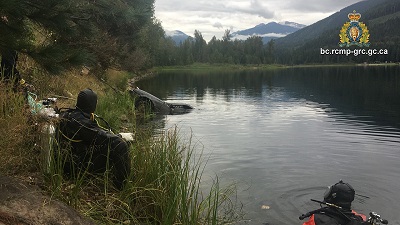 On August 21, just after 9:30 a.m. front line officers from the Revelstoke RCMP were called to Griffin Lake, for a report of a vehicle submerged in the lake, approximately 10 feet from the shore line.

With assistance from residents, RCMP officers were taken to the site and observed a vehicle that appeared to have been submerged for some time.

On August 24, a local tow company with RCMP Investigators and the RCMP Underwater Recovery Team returned to the lake and recovered an older model Honda Accord, with the body of an adult woman inside.

At this time, investigators are working closely with the BC Coroners Service to confirm the woman’s identity, states S/Sgt. Janelle Shoihet, of the BC RCMP. Early indicators are that her death does not involve criminality.

No further information is available from either RCMP or the BC Coroners Service.